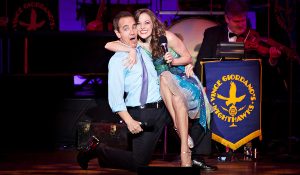 An erupting wellspring of euphoria: that would describe the vintage swing emanating from Vince Giordano and the Nighthawks at the 92nd Street Y during Saturday evening’s season-opening program of Lyrics & Lyricists. It is challenging enough for a band to churn out museum-ready facsimiles of 80-year-old pop tunes outfitted with stylistically accurate period arrangements. But Mr. […]

LITTLE ME / SUGAR – Comedic standout of the year, Broadway performer Jason Graae starred both in Sacramento Music Circus’ tap-dancing spectacular “Sugar” and San Francisco’s 42nd Street Moon production of “Little Me.” Audiences found Graae dressing like a woman to hide from gangsters in one show and playing a multitude of different characters in the other. With their hilarious stories and energetic […]